Soybean seeding rate and its relationship with yield has been intensely studied in major soybean-producing regions across the U.S. by industry, universities, and in grower on-farm trials. The goal of these studies, like that for many agricultural inputs, is to determine an agronomically optimal rate (the minimum level of input required to maximize yield). While many of these studies succeed in identifying optimal soybean seeding rates and quantifying variability between fields, they fail to evaluate the seeding rate response within the field’s own inherent variability (De Bruin and Pedersen, 2008; Epler and Staggenborg, 2008; Gaspar et al., 2017; Holshouser and Whittaker, 2002).

The adoption of variable rate drives on planters and digital tools over the past decade now allow growers to identify and better manage the spatial and temporal variability across a field to increase productivity and return on investment (ROI). This Crop Insights will discuss the potential to adapt this technology to optimize soybean seeding rates at a more granular level.

Past and Present Soybean Seeding Rates

Historically soybeans were often seeded at rates well over 200,000 seeds/acre. However, since the turn of the current century, on-farm seeding rates have steadily declined by roughly 2,000 seeds/acre/year to an average of 152,000 seeds/acre in 2017. There are numerous reasons for this decline. More accurate planting equipment is now common after many growers have switched from drills to row crop planters (>80%) as the number of crops in rotation has decreased (Jeschke and Lutt, 2016). Seed treatment adoption has reached >80% allowing for more successful stand establishment (Gaspar et al., 2015). Seed quality and vigor has dramatically improved with adoption of better seed handling and cleaning equipment (Shelar, 2008). Furthermore, the adoption of soybean varieties with herbicide resistance traits has shifted the focus away from cultural control tactics, such as higher seeding rates for weed management (Bertram and Pedersen, 2004). 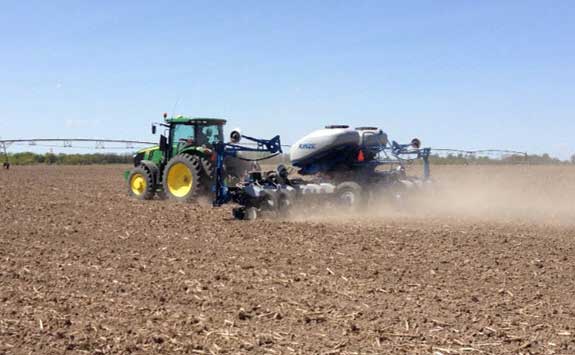 The aforementioned factors have caused growers to question if a further decrease in soybean seeding rates is warranted. Some studies have determined that 100,000 plants/acre at harvest time are required to maximize light interception and thus yield (Gaspar and Conley, 2015; Lee et al., 2008) while other studies have shown economically optimal seeding rates ranging from 95,000 to 130,000 seeds/acre (Gaspar et al., 2017). However, these studies are typically conducted on one soil type that is uniform, well drained, and highly productive, totaling less than one acre in size. This is done in an effort to minimize environmental effects and variability. The same has typically been the case where on-farm trials use strips across an entire field length, which moderates the impact of high and low productivity areas within that strip. In comparison to these studies, others have suggested seeding rates as high as 243,000 plants/acre are needed in more stressful environments (Holshouser and Whittaker, 2002). Thus, there is clearly a wide range of agronomically and economically optimal seeding rates and plant stands that depend on seed costs, grain prices, seed treatment use, and most importantly, the inherent productivity of the environment.

With the rapid adoption of geo-spatial tools, such as yield maps and variable rate planter drives, growers are better able to manage their annual seed investment by spatially adjusting seeding rates based upon the productivity of the environment and its underlying environmental factors (Smidt et al., 2016). This is applicable at the between-field and within-field levels. Variable rate seeding (VRS) technology has been rapidly adopted for corn production with early research taking place in the late 1990s (Bullock et al., 1998). Research and adoption has not been as intense for soybeans, but recent research from Gaspar et al. (2018) demonstrates that there are significant opportunities in VRS for soybeans. Therefore, we will incorporate the results of Gaspar et al., 2018 and provide guidance for successful soybean VRS implementation to manage the variability present in every field.

Growers have typically established a seeding rate that works across their farming operation based upon experience and regional recommendations to maximize yield and agronomic benefits, such as stand establishment, weed control, and disease management. This rate can be considered the agronomically optimal seeding rate (AOSR) for all yield levels (i.e., average or local standard seeding rate). Many have speculated that the philosophy behind soybean VRS should be the inverse of corn VRS, suggesting that soybean seeding rates should be increased in areas of lower productivity and decreased in areas of higher productivity compared to the “average” seeding rate. Many anecdotal reports have confirmed this philosophy as a method to increase yield in lower productivity areas as well as maintain yield and reduce seed costs in higher productivity areas, resulting in greater whole field yield and profit. However, there has yet to be a comprehensive study testing this philosophy until the recent publication of Gaspar et al. (2018).

Ultimately, exact seeding rates employed on a VRS prescription for an individual field will need to be determined on a case-by-case basis driven by grower experience and regional recommendation but should follow the VRS strategy outlined above by Gaspar et al. (2018). Your Pioneer Sales Representative can assist with this effort and details are discussed later.

Table 1. Agronomically optimal seeding rate (AOSR) relative to the average yield level AOSR and the risk associated with divergence from the AOSR in each yield level.

Physiological Drivers of This Strategy

Averaged over seeding rates, the effect of plant attrition on final yield is displayed in Figure 2. At the high yield level, plant attrition does not affect yield, while a negative relationship exists for the average and to a greater extent, low yield levels. Therefore, in low yield levels, not only are higher seeding rates required to reach the AOSR, but maintaining this increased plant stand throughout the growing season is critical to maximize yield (Figure 2). The use of seed treatments, appropriate tillage and planting practices, narrow rows, and adequate fertility are all components that can minimize in season plant attrition in areas of lower productivity.

A key point to remember is that soybean yield is linearly related to light interception, and this relationship is typically more critical in the Northern U.S. versus the Southern U.S. (assuming typical planting dates). Simply put, greater season-long light interception equals greater yield. In highly productive environments, current varieties can maintain yield with slightly reduced plant stands because the individual plant growth rate is not limited, and maximum light interception, and therefore yield, is still achievable. Furthermore, breeding efforts have increased the yield produced per plant, and specifically, this increase is attributed to the branches, not the main stem of the plant (Suhre et al., 2014). This complements lower plant stands by increasing the plant’s compensatory ability where plant stands are lower within highly productive areas (Carpenter and Board, 1997). However, in the inverse direction, breeding efforts have also made current soybean varieties more responsive to higher seeding rates. This complements the increased seeding rate required in areas of lower productivity, where plant growth rate and branching can be limited due to many potential factors, such as precipitation amount, soil water-holding capacity, nutrient supply, rooting depth, etc.

These factors, most commonly limiting in low productivity areas, can challenge the ability of soybean plants to maximize season-long light interception. Increased plant density is therefore required to maximize light interception and yield in these lower yield levels. In the same line, total season-long light interception is typically limited in northern latitudes, and this explains why the increase in seeding rate to reach the AOSR within the low yield level is relatively greater in northern versus southern latitudes (Gaspar et al., 2018). These aforementioned factors all contribute to the true physiological basis driving this soybean VRS strategy.

There is an opportunity for growers to fully utilize current planter technology and better manage their soybean seed investment by implementing VRS technology, particularly in more northern latitudes. Ultimately, the specific seeding rates for the varying levels of productivity across an individual field will be based upon local and regional recommendations, grower risk tolerance, economics, variety characteristics, seed treatment use, and other agronomic factors, but should follow the trend of increasing seeding rates in areas of lower productivity and decreasing seeding rates in areas of higher productivity. Pioneer sales representatives provide the necessary platform, agronomic science, and technology to develop successful soybean VRS prescriptions that consider genetic, environment, and other management components.

The foregoing is provided for informational use only. Contact your Pioneer sales professional for information and suggestions specific to your operation. Product performance is variable and subject to any number of environmental, disease, and pest pressures. Individual results may vary.